“These tactics are very clearly illegal,” said Schneiderman, who said he worked as a volunteer at a clinic as a young man.

State Attorney General Eric Schneiderman is suing 14 people, including two women with ties to a Woodhaven church, over allegations that they have repeatedly blocked or obstructed access to a Jamaica clinic that provides medical services to women including abortions.

The 32-page complaint, filed in federal court on Tuesday, also alleges that in some cases patients and staff have been verbally and physically intimidated and in some cases threatened.

Schneiderman and city Public Advocate Letitia James announced the action at a press conference on Tuesday outside the Choices Women’s Medical Center on 148th Street. 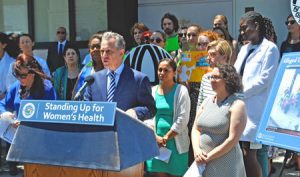 State Attorney General Eric Schneiderman in Jamaica on Tuesday, pointing to a still photo from a video purporting to show physical confrontations between protesters and people attempting to enter the Choices Women’s Medical Center.

Schneiderman, clinic founder Merle Hoffman and others allege that people attempting to enter the clinic on Saturdays are subjected to verbal and physical abuse.

“These tactics are very clearly illegal,” said Schneiderman, who said he worked as a volunteer at a clinic as a young man.

“The law guarantees women the right to control their own bodies and access to the healthcare they need without obstruction,” a right he said is “firmly established in federal, New York State and New York City Law.”

He said in some cases people entering the clinic are pushed into the building’s walls or must head out into the street to avoid protesters. The suit alleges that the incidents began in 2012.

The named defendants include Angela Braxton and Jasmine LaLonde, said to be affiliated with Grace Baptist Church in Woodhaven.

The Chronicle could not contact the women for comment prior to deadline on Wednesday, and a man answering the phone at the church declined to comment.

• Kenneth Griep, described as senior pastor at Church at the Rock in Brooklyn;

• Ronald George, pastor at Church at the Rock;

• Patricia Musco, counselor and youth director at the church;

• Sister Dorothy Rothar, said to be the founder of Bright Dawn Ministries in Brooklyn;

The suit is asking for a 16-foot buffer around the clinic; that the defendants be found to have violated federal, state and city clinic access laws; and to assess statutory or compensatory damages, as well as civil penalties.

James and Schneiderman were joined by representatives of Planned Parenthood, the National Institute for Reproductive Health, NOW-NYC among others.

Schneiderman said the requested 16-foot buffer — roughly the width of the sidewalk around the property — is not unreasonable.

He said while federal courts have thrown out larger buffer areas, the requested distance can protect all parties involved.

“It protects protesters’ right to free speech, and women’s equally important right to have control over their own bodies and have access to healthcare,” he said.

He also pointed out that far more than one court ruling has found that the right to free speech is not completely unabridged.

Hoffman said she opened the clinic in 1971, two years before the landmark Roe v. Wade ruling by the U.S. Supreme Court.

“New York was one of only five states that had legal abortion,” she said. “I had patients coming over the bridge from New Jersey because it was a crime.