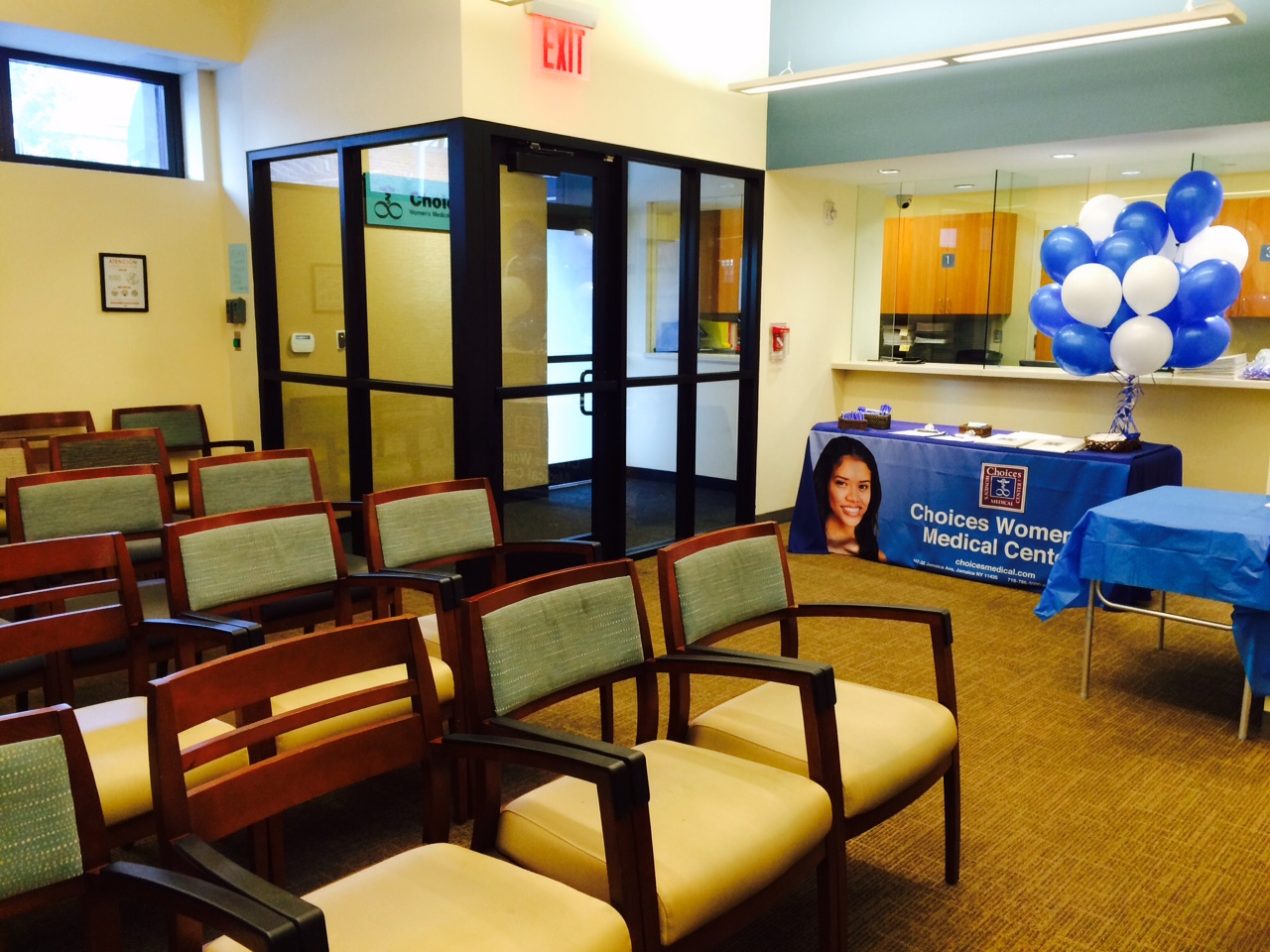 Abortion without the clinic on offer with revolutionary new US program

By Molly Redden | March 31, 2016 – A pilot study in New York, Hawaii, Oregon and Washington will allow women to receive abortion-inducing drugs through the mail and be counseled by video.

Esther Priegue, LCSW demonstrates the technology that will allow Choices Women’s Medical Center to counsel patients who receive abortion drugs through the mail. Photograph: Molly Redden for the Guardian

A groundbreaking new experiment is launching in four states that could make abortion dramatically more accessible by allowing women to obtain abortion-inducing drugs through the mail.

The program, which will be run as a pilot study out of four clinics in New York, Hawaii, Oregon and Washington State is a first in the US – and one that its architects urgently hope to expand as the country’s abortion clinics close down at historic rates.

“It’s the future,” said Esther Priegue, the director of counseling at Choices Women’s Medical Center in Queens, New York, where the first of the pilot programs launched last week. She spoke in her office, after walking through a waiting room thronged with women, many of them holding young children. “Especially in the times we’re living in today, women experience so many struggles getting through our doors. They’re mothers. They work. Imagine if they could do it all from home, and never have to step into the clinic for even a moment.”

At a time when the Republican frontrunner for president, Donald Trump, has called for women who have illegal abortions to face punsishment the study represents an island of progress for an abortion rights movement that can seem constantly beset on all sides.

The study may also finally deliver on what reproductive rights advocates have always seen as the true promise of abortion drugs: abortion, without the clinic.

The program works by making a key shift in how mifepristone, the nation’s most-used abortion drug, can be dispensed. Under current FDA rules, the drug is only available in clinical settings – never in pharmacies. The pilot, however, will permit four abortion clinics in four states to ship the medication by mail.

Patients in their first nine weeks of pregnancy can receive the pills by mail if they live in the same state as the clinic and undergo an ultrasound and blood test to confirm the pregnancy and rule out risks. (Unlike abortion clinics, the thinking goes, facilities offering blood tests and ultrasounds are plentiful.) A clinician will then counsel the patient on taking the pills via video conference. The counseling and drug regimen are unchanged.

“We always thought this drug was going to totally revolutionize how abortion was provided,” says Daniel Grossman, a professor with the obstetrics and gynecology department at the University of California, San Francisco who has studied telemedicine and abortion. “This is moving us closer to what women’s health advocates see as the real potential of medication abortion.”

The pilot program is the creation of Beverly Winikoff, Elizabeth Raymond, and Erica Chong of Gynuity, a New York research group which seeks ways to expand reproductive healthcare access with technology.

They are starting small. Last week in Queens, New York, the study officially launched at Choices Women’s Medical Center with little fanfare and no public pronouncements. They are awaiting their first enrollment. But if the model is shown to work, the researchers envision the study becoming an open-ended affair operating across multiple abortion-friendly states.

“We’d just keep expanding the study,” Raymond said. “That would be what we hope to do.”

The researchers are also bracing for rancorous opposition from abortion foes. (Already, hackers attacked a website Gynuity built for the study, forcing the group to switch web hosts.)

For the purposes of withstanding opposition, there is probably no better place the program could have launched than Choices in the Jamaica section of Queens.

Choices is owned by Merle Hoffman, a 45-year veteran of “this war we are fighting”, as she puts it, who is not short on pugnacity or panache. The lobby of her full-service OB-GYN clinic is adorned with Wonder Woman-themed art, and one wall of her office is dedicated to the 8ft-tall wire hanger she keeps as a souvenir from her most active protest days.

Here in Queens, Hoffman hopes the program will help women avoid long drives from upstate and hostility from the protesters who sometimes clog the sidewalk.

“I’ve seen every type of weapon used in this struggle,” she said recently. “Anything that could reinforce access for women is important because women are going to need it. This study is on the frontline.”

Merle Hoffman, the owner of Choices Women’s Medical Center in Queens, New York, holds up one of her favorite protest props. Photograph: Molly Redden for the Guardian

Laws that ban the use of telemedicine to facilitate abortion preclude Gynuity from operating in 18 different states and a similar model of telemedicine abortion, which connects women sitting in one clinic with a doctor sitting in another, has come under constant political assault in Iowa, Maine and Minnesota.

Ostensibly, the objection is one of safety.

“It is entirely reckless to hand out the drugs without supervision because of the deaths that have occurred,” said Kristi Hamrick, a spokeswoman for the legal group Americans United for Life, referring to 14 women who died while taking the drug. The FDA reported the deaths in a survey of more than 1.52 million women who took mifepristone between 2000 and 2011, but did not find conclusive evidence to tie mifepristone their deaths. At the same time, the survey found only 0.04% of women taking the drug had complications requiring hospitalization – comparable with the rate of hospitalization for many birth control pills. The most common reason for hospitalization was excessive bleeding – another risk cited by AUL.

In the minds of most reproductive healthcare providers, the drug is already over-regulated. The FDA’s requirement that the drug to be administered in clinical settings is unusual – a precaution normally reserved for intravenous drugs such as chemotherapy medications and certain dialysis aids.

Raymond says Gynuity hopes that the study will ultimately build the case for lifting the clinic requirement. The goal is not as far-fetched as it once seemed: on Wednesday, the FDA loosened restrictions on mifepristone, also known as Mifeprex, for the first time, bringing the total number of trips most women will make to a provider down to two, from three.

“There’s no medical reason why the pill has to be physically handed out by a clinician,” said Grossman. “This is such an incredibly safe medicine … There’s no reason to have any concerns about the safety of this model.”

Last August, the Gynuity team submitted their plans to the FDA Center for Drug Evaluation and Research and invited evaluators to raise any concerns. None were forthcoming.

Grossman’s research has helped establish the safety and effectiveness of a similar telemedicine program that began in Iowa under Planned Parenthood. That model requires women to come to a clinic for her dose of Mifeprex, but it allows the doctor to counsel her via video conference from hundreds of miles away. His research showed that thousands of women took the drug safely, although a small share of women required a surgical procedure to complete the abortion.

Gynuity can also look to a real-life example of what it hopes to achieve. In Australia, a Tasmanian gynecologist has provided more than 300 women with mifepristone by mail through a company called the Tabbot Foundation. (The name is a dig at Tony Abbot, the conservative who blocked Mifeprex from Australia when he served as its prime minister.)

“Medication abortion is one of the most appropriate services that can be provided by telemedicine,” said the OB-GYN, Paul Hyland. “We were inundated in our first weeks with demand.” The company has been doing business for five months and has never taken out an advertisement, and it is already shipping to 30 patients a week.

The study also resembled Women on Web – a controversy-stirring program in the Netherlands that mails abortion drugs to women in countries that prohibit the procedure. But the Gynuity researchers, unlike Women on Web, are requiring women to have ultrasounds and blood tests, and follow-up measures to ensure that the termination is complete. And while Women on Web insists that its actions are legal, their efforts facilitate abortions in countries where the procedure is decidedly not.

The Gynuity researchers only chose states where the local law allows mifepristone to be mailed within the state. Here in Queens, Choices Women’s Medical Center is expecting to enroll mainly patients from the Hudson Valley, the Catskills and Buffalo.

Gynuity will kick off similar programs in the coming weeks and months in Hawaii, Oregon and Washington. All three states provide an opportunity to test whether the model can work for rural women. In 2011, the Guttmacher Institute, a reproductive rights thinktank, found that most abortion clinics in the Pacific north-west were located in major cities, leaving 64% of Washington counties and 78% of Oregon counties without a single abortion clinic. (The two states have seen 10 more clinics vanish in the five years since.)

In Hawaii, only two islands out of the nine have abortion clinics. Some 140,000 women are separated from their nearest provider by the ocean.

The researchers will test many unknowns. Ultrasound and blood-testing facilities may be reluctant to provide services if they facilitate an abortion. Women may not follow up with the clinic to confirm that the pills worked. And it may wind up costing women more money, not less, to have the tests done at separate locations, instead of as part of a package at an abortion clinic.

The study will also engage with some broader questions facing the healthcare industry as telemedicine takes on a greater role. The researchers will be looking to see if insurance companies provide the same reimbursement levels for video and in-person counseling sessions. They also want to evaluate whether the telemedicine option is less expensive for the patients. Raymond notes that the study will not be large enough to compare the relative safety or effectiveness of telemedicine versus in-person visits.

In the current political atmosphere, the study feels out of place. At a town hall event on Wednesday, Trump said that “there has to be some form of punishment” for women who continued to get abortions if the procedure were outlawed. Trump later reversed himself, saying, “The woman is a victim in this case as is the life in her womb.” Among the crush of people denouncing Trump’s comments was Senator Ted Cruz, Trump’s next closest competitor who has supported abortion bans without exceptions even for victims of rape.

“[Gynuity] should be ready for a wall of opposition,” said Hyland, the Australian OB-GYN.

And, he said, they should exhilarated.

“Mifepristone is the most revolutionary drug in reproductive medicine since contraception. It’s amazing that this can be provided so easily and that we’ve taken such a long time to realize its true potential.”

Abortion Without the Clinic
Scroll to top