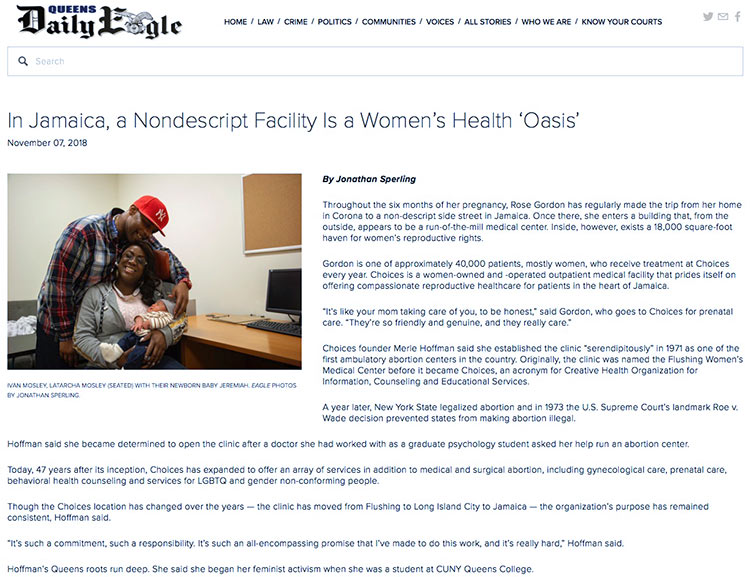 In Jamaica, a Nondescript Facility Is a Women’s Health ‘Oasis’

By Jonathan Sperling | November 07, 2018 – Throughout the six months of her pregnancy, Rose Gordon has regularly made the trip from her home in Corona to a non-descript side street in Jamaica. Once there, she enters a building that, from the outside, appears to be a run-of-the-mill medical center. Inside, however, exists a 18,000 square-foot haven for women’s reproductive rights.

Gordon is one of approximately 40,000 patients, mostly women, who receive treatment at Choices every year. Choices is a women-owned and -operated outpatient medical facility that prides itself on offering compassionate reproductive healthcare for patients in the heart of Jamaica.

“It’s like your mom taking care of you, to be honest,” said Gordon, who goes to Choices for prenatal care. “They’re so friendly and genuine, and they really care.”

Choices founder Merle Hoffman said she established the clinic “serendipitously” in 1971 as one of the first ambulatory abortion centers in the country. Originally, the clinic was named the Flushing Women’s Medical Center before it became Choices, an acronym for Creative Health Organization for Information, Counseling and Educational Services.

Hoffman said she became determined to open the clinic after a doctor she had worked with as a graduate psychology student asked her help run an abortion center.

Today, 47 years after its inception, Choices has expanded to offer an array of services in addition to medical and surgical abortion, including gynecological care, prenatal care, behavioral health counseling and services for LGBTQ and gender non-conforming people.

Though the Choices location has changed over the years — the clinic has moved from Flushing to Long Island City to Jamaica — the organization’s purpose has remained consistent, Hoffman said.

“It’s such a commitment, such a responsibility. It’s such an all-encompassing promise that I’ve made to do this work, and it’s really hard,” Hoffman said.

Hoffman’s Queens roots run deep. She said she began her feminist activism when she was a student at CUNY Queens College.

Her office contains several relics of the movement, including a giant coat hanger she once held on the steps of St. Patrick’s Cathedral during a 1989 demonstration and a poster of proclamations directed at former Archbishop of New York John Joseph O’Connor, who had recently come out in support of the anti-abortion group Operation Rescue.

“What’s been the most rewarding comes in little pieces of light. The staff comes in and says, ‘this patient said this,’ ‘You saved this one’s life,’ ‘This one wants to meet you,’ ‘This one’s doing better,’” she said. “It’s the ability to touch a life and to make a positive difference. And we do that everyday.”

The location of Choices’ Jamaica facility, which opened in 2012, was not selected at random, she said. The neighborhood has historically reported a high teen birth rate — 35 percent higher than Queens overall in 2003-2004, according to Choices.

In 2006, the New York City Department of Health and Mental Hygiene rated Jamaica in the bottom 10 of 41 NYC neighborhoods on the agency’s “Having a Healthy Baby” indicator in that year’s Community Health Profile. Hoffman said those factors, combined with a greater likelihood among mothers in Jamaica to receive less prenatal care than mothers elsewhere in the city, made the neighborhood a prime choice for opening the new clinic location.

The change has not stopped patients from traveling to the facility from communities outside of Queens. People visit Choices from Long Island, other states and even other countries, Hoffman said. Roughly 20 percent of patients come from outside of the borough, she said.

“The staff here, I love them. They made me feel really comfortable, they took pride in their work, and I looked forward to coming to my visits too,” Latarcha Mosley told the Eagle.

Mosley said she regularly commuted to Choices from Manhattan during her pregnancy in order to receive prenatal care. Her son, Jeremiah, was born on Oct. 26.

“I felt so blessed that I chose this clinic. And to see that all their work paid off, all of the tests that they did — they didn’t miss a beat,” Mosley said. “I haven’t had a baby in 12 years, and this is the most amazing experience ever. I didn’t think it was going to be this amazing, but it feels great just to look in his face and say ‘This is what I did.’”

Upon entering Choices’ lobby area, patients are assigned a number depending on what service they require, for purposes of patient confidentiality. Local artwork from the Jamaica Art Council lines the lobby wall.

Besides a gynecological suite, the facility’s second floor hosts a security guard who keeps watch from a booth full of on-site camera feeds, “for the safety of patients and staff,” according to Choices’ Clinic Administrator Esther Priegue. She noted that anti-abortion protesters often show up early in the morning on weekdays, as well as on Saturdays.

“They’ve been protesting for years, it’s nothing new,” said Priegue.

Sometimes Choices’ patients are escorted from the street to the door of the facility by a volunteer group for protection; the protesters’ primary tactic is verbal abuse.

“They’re like, ‘Oh, you shouldn’t go in there, they kill babies. You should keep your child.’ I’m like, ‘oh my God, I’m just coming here for my first appointment, calm down.’ But I didn’t let it bother me,” said Gordon. “I felt so bad, because I’m like don’t attack me, you don’t know what’s going on, you have your own opinions.”

As long as there are women in need, however, Hoffman believes there is a long future ahead for Choices.

“I think we’re going to do more and more,” Hoffman said. “We just started genetic screening, we do more programs, we’re expanding the behavioral health program, and as I see it — because of restrictions — we’re going to be seeing a lot more women from out of state.”

This article is part one in a series about Choices Women’s Medical Center and women’s reproductive rights in Queens.

In Jamaica, a Nondescript Facility Is a Women’s Health ‘Oasis’
Scroll to top