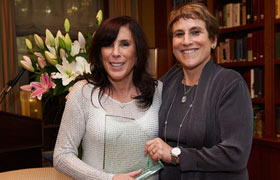 By Merle Hoffman – I want to share with all of you the pleasure of being the recipient of the 2015 “Bella” Award given to me earlier this month by the Bella Abzug Leadership Institute (BALI).

Not only was I honored to be presented this award by Liz Abzug, Bella’s daughter and founder of BALI, but to be in the presence of some of the young women who are BALI-trained and mentored here in NYC each year. After a warm introduction by Liz Abzug, I made the following comments:

I am so deeply honored, not only because of the recognition and reinforcement that this award gives me, but because this award comes from YOU and BALI who come from the inspiration and the lived life of your extraordinary mother, Bella Abzug.

How fortunate the young women of BALI are, as we all are, to have Bella come before us.

When I grew up in the 1950s there were not many role models of women who achieved greatness, so I became obsessed with Queen Elizabeth the First and Joan of Arc.

I was very young when I first heard Bella speak against the War in Vietnam. I remember going into a room full of standing, cheering people – and experienced that energy, that passion, that transcendent righteous rage that burned right through you.

I always thought of Bella when I found myself speaking to crowds and exhorting and inspiring them to fight against another kind of war, a war that continues today, a multi-national and -generational war against women. A war whose theaters of operations are women’s bodies themselves.

Because, make no mistake, the struggle for reproductive justice and legal abortion is the front line and the bottom line of women’s freedom.

I have been privileged to lead a life on the front lines of this war where I have witnessed and learned to practice courage, patience and humility. My journey has been a difficult, challenging and unique one, and my politics came from the ground up.

I was very young and in graduate school for social psychology when I saw my first patient. Abortion had just become legal – and what had been a crime the day before, a sin, an abomination, now was a legally sanctioned medical procedure. The world had turned upside down.

She was young, she was white, married with one child, and another would mean financial disaster. Someone said to me, go in there and counsel her. Counsel her?

Theories and more theories rushed into my mind. I was terrified, and so was she. There was no such thing then as abortion counseling. But I went into the room and spoke to her, was present with her. I have no memory of what we talked about, perhaps the details of the procedure itself. And then I stayed with her – there was no anesthesia, so I held her hand through her abortion. And it was her hand, that intimate personal connection that wed me to this issue, to this struggle.

Now so many years later, so many hands later, the responsibility of that commitment still is with me. I don’t remember her name or her face. But I remember her hand, her hand that became the catalyst and inspiration for all my future work.

And I remember the moment I became political. It was in 1977. Henry Hyde, the Republican Congressman, had inserted his infamous – and now, it appears, eternal – ban on Medicaid funds being used for abortion. I remember watching him on the television saying, if we can’t save all the children, we can save the children of the poor. These were my patients; this was my lived reality.

Thirty-eight years later – yes, 38 years later – we still have the Hyde Amendment, and much worse, as egregious Orwellian anti-woman laws are passed state by state. We still have millions of women who are ashamed to and afraid to say “I had an abortion.” And we still have many young people who do not realize that freedom is not free – and requires constant vigilance.

BALI, we need you – we need young, committed, passionate, righteously angry young women to take up this struggle. To risk, to be bold, to follow the visionaries like Bella who came before you – because if you can’t learn to follow, you will never lead.

It is 44 years since I saw that first patient – 44 years of struggle, death threats, evictions, harassment – and my patients, the women who through all the years have kept coming, over one million of them, have taught me that.

As my old friend Flo Kennedy said, “You’ve got to learn to love the struggle.” Because we will have struggle for generations, and if you love it and embrace it, that love will change the world and give you a life of meaning.