This is a major win for abortion access. Schneiderman said in a statement, “The law guarantees women the right to control their own bodies and access the reproductive health care they need, without obstruction. We’ll do what it takes to protect those rights for women across New York.”

“The tactics used to harass and menace Choices’ patients, families, volunteers, and staff are not only horrifying ― they’re illegal,” Schneiderman said in a statement. “The law guarantees women the right to control their own bodies and access the reproductive health care they need, without obstruction. We’ll do what it takes to protect those rights for women across New York.”

The announcement was made outside Choices, an abortion clinic in New York City’s Jamaica neighborhood. Every Saturday for the last five years, local anti-abortion protestors have posted up outside of Choices to harass patients. This harassment has included following patients with 3×5 grotesque and heavily edited photos of aborted fetuses, following patients to the door of the clinic and attempting to go inside with them, preaching anti-abortion and misogynist rhetoric loudly just outside the clinic entrance, waiting for patients as they exit their cars, and waving pamphlets and fliers into the faces of the patients and their companions. (Full disclosure: I work as a clinic escort volunteer at Choices, and have seen all of this firsthand.)

This behavior from abortion clinic protestors is often defended under the guise of the First Amendment. But Schneiderman was quick to point out in the press conference that access to safe and legal abortion is also protected by the U.S. Constitution, and that there have always been laws that regulate freedom of speech.

“It is as old as the First Amendment that proper restrictions on time, place and manner of speech are totally lawful. There are many things that are ‘speech’ that are restricted by the law,” Schneiderman said Tuesday.

“You are not allowed to … harass, intimidate and try and prevent people from exercising their constitutional rights,” he added. 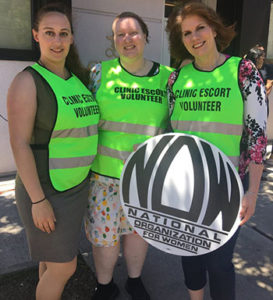 JENAVIEVE HATCH FOR HUFFPOST
Volunteer Clinic Escort Supervisors Margot Garnick, Pearl Brady and Theresa White have spent the last year and a half working to build a case against anti-abortion protestors outside Choices in Queens.

Theresa White, a longtime volunteer clinic escort from Queens and clinic escort supervisor who worked with Schneiderman to build the case against the anti-abortion protestors (or “antis”), told HuffPost that this is a serious win for the women of New York and the pro-abortion rights community.

“We’ve been working on this for over a year,” she said. “This just feels fantastic.”

Other women’s rights activists around the country see New York’s lawsuit against the antis as a loud statement against abortion clinic harassment ― and hope that their cities can follow suit.

Calla Hales, clinic administrator at A Preferred Women’s Health Center in Charlotte, North Carolina, told HuffPost that she hopes the city of Charlotte is paying attention.

Hales is used to hundreds of protestors every Saturday outside the clinic in Charlotte and faces ambivalence with local legislators when it comes to protecting patients.

“I feel so positive about this,” Hales said. “I understand that protesting and free speech are protected rights. However, it’s very clear that what’s occurring when these groups protest abortion clinics is not merely voicing a different opinion ― it’s harassment, it’s intimidation, and it’s simply cruel. I hope that other cities, Charlotte included, will take note of this.”

Jessica Gird, a clinic escort in Michigan at Northland Family Planning, told HuffPost that the city of Westland has done little to support patients and clinic staff.

“Legislation has really not done a whole lot that benefits patients and staff alike,” she said Tuesday. “In regard to what the antis can and cannot do, it’s relatively expansive in their favor, especially if looked at from the psychological and emotional effects from the patient’s standpoint.”

Gird said that choosing to terminate a pregnancy isn’t always an easy choice ― and that antis make the entire experience much more traumatizing than it should be.

“While there is no universal abortion experience, this can already be an emotionally charged collection of moments in time,” she said. “They shame our patients and staff, they use manipulation tactics with patients from black and brown communities and with people who are forced to arrive with children, they promote these ideas that have no factual basis to those in vulnerable states, and to me that is in direct opposition to the Christian belief system that they claim to adhere so closely to.”

Derenda Hancock, a clinic escort for Jackson Women’s Health Organization in Jackson, Mississippi, told HuffPost that she wishes the city of Jackson would do more to protect patients, too ― especially because “the Pink House” is the only remaining clinic in the state.

Hancock said that the antis sued the city of Jackson, and the city government caved ― the antis were given a consent decree and no longer have to follow city ordinances for noise levels, signage and buffer zones.

“They get away with all kinds of things,” she said.

As states continue to allow the constant interference that occurs outside of abortion clinics, New York’s lawsuit against aggressive anti-abortion harassment is a major win for clinic patients and the abortion rights community. The lawsuit has set a strong precedent for state and city governments to defend women’s health care access.